Getting old has never been an easy task for anyone, let us focus on the aspects that make getting older difficult for men. The aging man is mainly grappling with the need to redesign a new profile of virility, because ageing makes him feel affected in at least three fundamental areas of his identity: physical strength, love conquest and sexual performance, the competition with other males.

Physical strength: It is undeniable: as you age your muscle mass and therefore your physical power undergoes a constant decrease.

An objective fact that gives rise to different reactions, grouped in a sort of continuum between two opposite extremes: on the one hand that of an impotent resignation that leads to letting go, on the other that of a push of the physical beyond natural limits. The eloquent images of some body builders over sixty are both exemplary and gruesome – a life between steroids and frantic workouts. 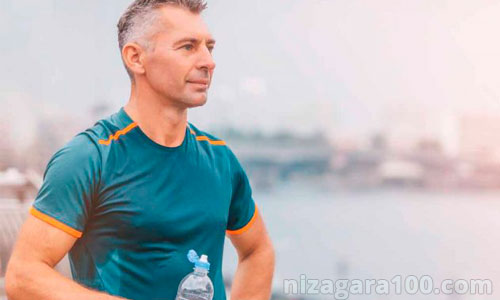 The third way, the most difficult, certainly the most fruitful, is to take care of your body. Help it keep its set of skills realistically trained. Learn to know its new times, rhythms, supporting them and using them, with an exercise that is not extreme but constant. This is a road that is not only more appropriate to the body, but that bears fruit, perhaps even more precious, to the mind.

Taking care of your body in a realistic way, learning both to protect it and to maintain its capabilities, in fact predisposes the mind more easily, at least towards two things: to a sort of gratitude first of all for what the body still enables us to do, and secondly to a new quality of satisfaction; the one linked to a more earned and therefore less obvious achievement.

If we think of a boy who makes the ascent to the top of a mountain in an hour, his satisfaction is linked more to having pushed everything that nature, by age, naturally endows him in terms of energy, muscle strength and endurance . Reached that top, he is ready to leave for the next more difficult one. At a mature age, things change: reaching a peak is less obvious. The exercise, the commitment, the self-determination that required give the flavor of a more deserved and earned achievement. In short, the same peak and two different ways of feeling strong and valid.

Attraction and sexuality in an ageing male

Do I have to settle for a peer? Single men who are still in the dating game are faced with the dilemma of whether they should go for their peers or try their chances with younger females. As the age advances, they start feeling this perspective of being only eligible for women their own age, or worse as the antechamber of the end of the game of seduction and love.

Not infrequently, however, this drastic and demeaning conclusion is linked to a natural gap between mind and heart: if the mind of a sixty year old is fully aware that he cannot easily impress a twenty year old, sometimes his heart sees in this impossibility a disconfirmation of his virility, beyond any rational awareness of it.

Of course attracting a young woman means in a more immediate way to feel still alive, capable and strong and ourselves still young and fascinating. If we consider, however, as an important part of charm and attraction and sexual satisfaction, elements such as complicity, self-knowledge, understanding who we are and what we want from the other, certainly these things, albeit with the necessary exceptions, are more shareable with a peer.

The above also applies to the sexual area, in which the objectives and areas of satisfaction are equally revisited. For example, the gratification of being capable of strong erections and repeated performance should be valued less than the newly acquired ability that derives from greater experience and awareness. These are often essential elements to create an intimacy less known in youth.